Figuring out the cause

Some headaches are due to the activation of pain nerves in the head. Tension headaches and migraines are examples of these kinds of headaches. Other times headaches are a symptom of another condition. These other conditions include hangover, low blood sugar, allergies or sinus congestion, ear infections, dental problems or over-use of pain medications. Headaches can also be a side effect of a prescription drug. 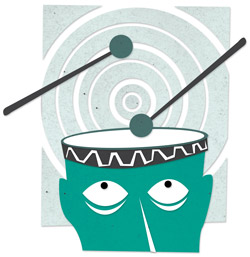 Some headaches can be a symptom of a serious or even life-threatening condition, such as:

Headaches that are severe, last for more than a few hours or recur should be taken seriously. This is especially true if these symptoms are new. For instance, severe headaches lasting for hours are certainly problematic, but potentially less concerning if you have a history of migraines and your symptoms are identical to your previous episodes.

That said, certain headache “red flags” should be addressed urgently when they occur. A severe headache that comes on very suddenly or reaches its maximum intensity within minutes could be a sign of a very serious problem. See “Stroke and aneurysm”. In these cases, people should get medical attention right away.

If you have recurrent or severe headaches, talk to your doctor. He or she may refer you to a neurologist or HIV specialist for a comprehensive diagnosis. It is best not to treat such headaches with pain medications until the problem has been diagnosed and the treatment prescribed. If you cover up a headache with pain medications, it can make the diagnosis of something serious more difficult.

Be sure to describe to your doctor how often your headaches occur, how severe they are, whether there is any pattern to their occurrence (for example, time of day, after eating certain foods or doing certain activities), and whether you experience any other symptoms, such as neurological symptoms (for example, physical weakness) or fever.

Don’t forget the possibility that your headache may be related to something other than HIV. Healthcare practitioners sometimes use diagnostic procedures that focus too much on opportunistic infections and HIV-related conditions, forgetting that people with HIV are also susceptible to other conditions.

Headaches can sometimes be a side effect of antiretroviral therapy. In some cases, headaches will only occur during the beginning of drug therapy and will gradually disappear over the next few weeks. In other cases, they may remain long-term, and the only solution may be to switch drugs. Medications should be particularly suspected as a cause of headaches when a new drug treatment has recently been started. Note, however, that such reactions can occur even after months of using a particular drug.

Another possible cause of headaches is lactic acidosis. For anyone taking one of the nucleoside analogues (such as AZT or d4T) or other medications associated with them, lactic acidosis should be considered. Newer agents like abacavir (Ziagen and in Kivexa and Trizivir) and tenofovir (Viread, and in Truvada, Atripla, Complera and Stribild) are much less likely to cause lactic acidosis than their older counterparts, so this has become less of a concern in recent years. Lactic acidosis may be suspected especially if the headache is combined with other symptoms of this condition. These include fatigue; nausea and vomiting; pain in the stomach, abdomen, or liver; unexplained weight loss; difficulty breathing; cold hands and feet; blue skin colour; and sudden symptoms of peripheral neuropathy. For a full discussion of this condition see the section Less Common Side Effects.

Infections and other conditions

Headaches can also be a symptom of many different infections and conditions that are important to diagnose and treat, including:

With any severe headache, the possibility of a stroke (the loss of blood flow to a part of the brain) or the rupturing of an aneurysm (a bulge or ballooning of a blood vessel in the brain) should always be considered. As people with HIV live longer lives, their risk of cardiovascular disease increases. Cardiovascular disease can occur at a younger age in HIV-positive people than is typical in the HIV-negative population.

Common symptoms of a stroke are: sudden paralysis or weakness in the face or limbs, especially on one side of the body; sudden problems with balance or walking; sudden vision problems; slurred speech; and sudden confusion or problems understanding simple statements.

With a ruptured aneurysm, a headache — sometimes described as the worst headache ever — often comes on quickly and reaches maximum intensity in minutes. It can be accompanied by confusion, numbness, trouble seeing, speaking or walking, a stiff neck, a high fever or nausea or vomiting.

If you experience one or more of these symptoms, seek medical attention immediately. Call 911 if your region has that emergency service.

Blood sugar problems may also contribute to headaches. As people with HIV age, they may develop insulin resistance and diabetes, which can result in serious blood sugar problems. When your blood sugar drops too low, it can cause a headache that may not resolve for a number of hours. If you are having recurrent blood sugar ups and downs, this can cause recurrent headaches. These headaches can be resolved by stabilizing your blood sugar. Eating frequent small meals that are nutritionally balanced, with fibre, complex carbohydrates and protein can help, as can exercising regularly.

Magnesium deficiency can occur in people with HIV and can cause headaches; supplementing with magnesium can eliminate this problem. Magnesium supplementation should not be substituted for immediate medical attention for severe or recurrent headaches. If no other cause for your headache is found, keep the possibility of this deficiency in mind. Be aware that doses of magnesium above 350 mg per day can cause diarrhea. Magnesium glycinate may be better tolerated than other forms.

It is important to remember that if you are treating your headache with pain medication, your choice of drugs should be made in the context of all the other factors currently affecting you, including:

Talk to your doctor about which pain medications are right for you. A drug from the class called non-steroidal anti-inflammatory drugs (NSAIDs) is one choice. NSAIDs include ibuprofen (Advil, Motrin), naproxen (Aleve) and acetylsalicylic acid (Aspirin). Long-term use of Aspirin or other NSAIDs can cause damage to the lining of the stomach and intestines and can lead to gastrointestinal bleeding. Also, people taking tenofovir should talk to their doctors about taking NSAIDs as there is a risk of kidney injury. In general, only use these medications when you need them to relieve headaches, and avoid long-term use if possible.

Acetaminophen (Tylenol) is another common painkiller and is found in many over-the-counter medications. Because it is widespread, acetaminophen overdose is a concern. It is the most common cause of acute liver failure in North America, and alcohol consumption or liver disease, such as hepatitis C, can substantially increase the risk. The standard maximum short-term dose is 3,000 mg per day (or only six extra-strength 500-mg tablets). In people who drink alcohol, liver damage may occur with consumption of only 2,600 mg of acetaminophen a day. It is strongly recommended that people who drink alcohol regularly limit their use of acetaminophen to a maximum of 2,000 mg per day. This means taking no more than two to four standard-strength pills within a 24-hour period.

Acetaminophen is also an active ingredient in many other medications, including popular headache and cold remedies such as Dayquil, Nyquil, Anacin 3 and others. It is important to read the labels of all over-the-counter medications and prescription medications very carefully in order to be certain you never take more than the recommended dose.

Some kinds of headaches can be treated with other types of therapy, including deep-tissue massage, acupuncture or acupressure and herbs. The herb feverfew, for example, may help. It contains parthenolide, an agent that reduces spasms in blood vessels in the head. Feverfew has been shown to work for both migraines and tension headaches.

Be sure to tell your pharmacist or doctor about all the medications, over-the-counter drugs, supplements and herbal therapies you take. These products can interact with your antiretroviral drugs, causing them to become less effective or increasing the risk you will experience side effects.