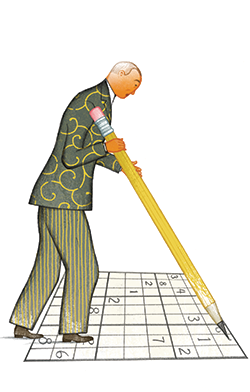 Growing older in good health includes maintaining a healthy brain. Since effective antiretroviral therapy became widely available, HIV-related dementia—the serious deterioration in mental function that was once common among people living with HIV—is now rarely diagnosed. However, milder forms of cognitive impairment remain common among people with HIV. Through ongoing research, we are learning more and more about ways to minimize the effects of HIV on the brain.

HIV-associated neurocognitive disorders (HAND) is an umbrella term that covers a range of problems:

Exactly how many people with HIV in Canada have HAND is not clear—estimates range from 15 to 50 percent. The vast majority of people with this condition have either asymptomatic or mild neurocognitive impairment.

HAND is not fully understood but it is thought to result from a combination of brain cell injury due to chronic inflammation and a weakened immune system that leaves these nerve cells unprotected. In addition to HIV-related effects on the brain, many other factors can cause or contribute to neurocognitive impairment, including:

The diagnosis of HAND can pose a number of challenges. Many of the tests for HAND are time-consuming and your doctor may not have the resources required to perform them. But thanks to an increased focus on this disease by researchers and healthcare professionals, a number of more easily administered screening tests have been developed. These include the five-question HIV Dementia Scale, which can be used to detect both severe and milder forms of impairment; the Montreal Cognitive Assessment (MoCA), designed to help detect mild cognitive impairment; and the International HIV Dementia Scale, which has been validated for use with populations of different cultural backgrounds but not to screen for milder forms of HAND.

If you’re living with HIV and are concerned about mental changes you’re experiencing, the first step is to see your doctor to rule out other conditions that can produce symptoms sometimes mistaken for HAND. These include depression, anxiety, hepatitis B or C, substance use, cardiovascular disease, prediabetes and diabetes, vitamin B12 deficiency and hypothyroidism as well as side effects from prescription drugs, including some antiretrovirals, such as efavirenz (sold as Sustiva, also in the combination drug Atripla), and narcotics. Ruling out these other possible causes can help to establish the likelihood of HAND and the need for diagnostic testing. If one or more of these other factors is causing mental changes, addressing them could reduce or even eliminate the problem.

If you’re concerned about problems with your memory or thinking, you might want to keep a record of these problems and how often you notice them so that you can discuss them with your doctor. If your family, friends or other people around you point out symptoms that they have observed, you might want to make a note of these, too. The more information you can provide your doctor with, the better you will be able to address the issue together.

Lowering the risk and reversing symptoms

Fortunately, there are things you can do to help prevent symptoms of HAND or, if you already have symptoms, to minimize them or prevent them from worsening.

Antiretroviral therapy (ART) hugely diminishes the risk of the more severe forms of HAND. Since potent ART became widely available, the rates of HIV-associated dementia have plummeted in Canada and other high-income countries. People who have an undetectable viral load are much less likely to develop HIV-associated dementia; if they already have symptoms, those symptoms are much less likely to worsen. It appears that taking at least one antiretroviral drug that penetrates the blood-brain barrier as part of your antiretroviral therapy may help to protect the brain. (In the chart above, HIV drugs are ranked according to their ability to penetrate the blood-brain barrier.)

Because inflammation in the brain may be a major underlying cause of HAND, countering it is important.

Cardiovascular disease and chronic kidney disease can also result in increased inflammation in the brain, so these conditions need to be managed as effectively as possible.

Vitamin B12 is important for keeping your brain in good working order. Severe long-term B12 deficiency can result in memory loss, confusion, paranoia, sadness, depression, shaking, unstable gait, a tendency to fall and even an inability to communicate properly. (Many of these symptoms are also seen in people with HIV-associated dementia.)

At the early stage of B12 deficiency, the problem is almost always fully reversible. Vitamin B12 supplementation can often improve the mental function of people living with HIV. But research has shown that some of the damage caused by a lack of vitamin B12 may become irreversible if B12 therapy is not initiated in time. So, if you’re noticing unusual memory loss or other aspects of diminishing mental function, talk to your doctor or a dietitian about ways to ensure that you’re getting enough vitamin B12 and, if necessary, to begin B12 supplementation.

An underactive thyroid (hypothyroidism) can cause a feeling of “brain fog” that is very similar to what many people with HIV who experience neurocognitive symptoms report. So it is important to get tested to determine if hypothyroidism might be contributing to your neurocognitive symptoms. Your doctor should regularly check your levels of TSH (thyroid-stimulating hormone, an indirect indicator of thyroid function) and thyroid hormones (especially free T3 and free T4), if indicated. If your test results reveal that your levels are low, thyroid replacement therapy can help restore your mental energy and function and lift that feeling of brain fog.

Take care of your emotional well-being

A supportive healthcare provider should be able to work with you to identify the problem, determine what’s behind it and figure out ways you can deal with it. Depression in people with HIV—especially in men—can be caused by low levels of testosterone.

A healthy lifestyle can help protect the brain in many ways: