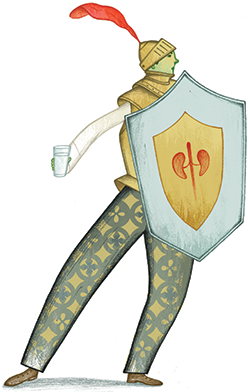 Although they are small, the kidneys do invaluable work protecting the body. They process almost 200 litres of blood every day, to filter almost two litres of waste products and extra water, which then become urine. If the kidneys are not working well, this waste builds up in the blood and can damage the body.

The kidneys also play other crucial roles: They regulate mineral levels in the body, produce a hormone that stimulates the production of red blood cells, help regulate blood pressure, and process vitamin D into its active form, which we need to build healthy bones, maintain cardiovascular health, help guard against cancer and prevent depression, among other things. Monitoring your kidney function and keeping these powerful organs in good shape is essential for the long-term health of all people living with HIV.

Both HIV and various antiretroviral meds can take a toll on the kidneys, as can traditional risk factors.

People living with HIV whose CD4 count is below 200 or whose viral load is not controlled are at greater risk for kidney disease. When untreated HIV infection is the cause of kidney problems, antiretroviral therapy (ART) might help. Some antiretroviral medications do, however, have the potential to cause kidney injury, also known as renal toxicity or nephrotoxicity.

The HIV medication tenofovir disoproxil fumarate or TDF (Viread, also in Truvada, Atripla, Complera and Stribild) and certain protease inhibitors, such as indinavir (Crixivan), atazanavir (Reyataz) and lopinavir/ritonavir (Kaletra), can all cause kidney injury.

In the same study, TDF use was also associated with higher levels of parathyroid hormone (PTH). When PTH levels remain high, kidney function can become impaired. Although it is not clear from this study whether elevated PTH is the main or only way in which tenofovir damages the kidneys, several earlier studies also suggested a link. In this study, PTH levels were more likely to be elevated among people with low vitamin D levels, leading the researchers to suggest that vitamin D supplementation for such individuals might protect against PTH elevation. So if you are taking TDF, you might want to talk to your doctor about testing your vitamin D level and, if necessary, taking whatever amount of vitamin D supplementation is required.

Many other prescription medications, over-the-counter meds, natural health products and street drugs can potentially have adverse effects on the kidneys. These include nonsteroidal anti-inflammatory drugs (NSAIDs), certain antibiotics and diuretics, intravenous acyclovir or valacyclovir (Valtrex), the antifungal drug amphotericin B (Fungizone), some weight loss supplements, cocaine, heroin and amphetamines, among many others. Also, drugs that don’t normally cause kidney damage on their own can sometimes interact with one another and thereby lead to kidney damage. This is why it’s so important that both your doctor(s) and pharmacist know about all of the medications and drugs you are taking.

Cigarette smoking is a major risk factor for kidney disease. When consumed in large amounts, alcohol can also damage the kidneys.

Hepatitis C infection can damage not only the liver but also the kidneys. People living with HIV who are co-infected with hepatitis C are at increased risk of chronic kidney disease and renal failure.

Symptoms that can occur with seriously decreased kidney function include:

To screen for kidney damage, your doctor may order one or more of the following simple tests:

If the above tests indicate serious kidney dysfunction, your doctor may order kidney imaging tests—an ultrasound, CT scan or MRI—or a biopsy.

If tests reveal kidney damage, it is important to immediately address anything that could be contributing to this problem. If you are currently taking a drug that could be to blame, your doctor might suggest replacing it with a different one. (Note that you should never stop taking an HIV medication without discussing it with your doctor first.) If your doctor suggests discontinuing TDF, the problem may not resolve immediately but at least you might be able to prevent your symptoms from worsening.

Here are some other ways that you can protect your kidneys and prevent kidney damage from worsening:

Kidney stones are an entirely different problem, unrelated to chronic kidney damage. If you or someone you know has ever had kidney stones, you probably know that they can cause severe pain. But the upside is they rarely do significant long-term damage.

A kidney stone is a solid mass made up of tiny crystals that stick together. A kidney stone can be as small as a grain of salt or as large as a lime. One or more stones can be in the kidney or ureter (the thin tube that carries urine from the kidneys to the bladder) at the same time. In general, stones form when the urine contains too much of certain crystal-forming substances, which then become stones, a process that can take weeks or even months.

Kidney stones tend to be more common among people who live in warmer climates. Part of the reason for this is that kidney stones develop when your urine has a higher concentration of minerals or crystals, which is more likely to happen when people sweat more. People who don’t drink enough fluids are also more likely to develop kidney stones.

A few antiretrovirals have been known to cause kidney stones or a similar problem called “sludge,” including the rarely used protease inhibitor indinavir (Crixivan) and, much less commonly, atazanavir (Reyataz) and possibly efavirenz (Sustiva). Other medications that can cause stones to form include the anti-herpes drug acyclovir and its other form valacyclovir (Valtrex); a diuretic called triamterene, used to treat fluid retention in people with liver or heart disease and other conditions; the antibiotic combo trimethoprim-sulfamethoxazole (Septra/Bactrim), used to prevent and treat pneumonia in people with HIV; and the antifungal drug amphotericin B (Fungizone).

Calcium stones are by far the most common type of kidney stone. They can occur in men and women at any age but are most common in men. Calcium combines with other substances, such as oxalate or phosphate, to form the stone.

You may want to increase your fluid intake to increase the amount of urine that flows through the kidneys. This will reduce the concentrations of calcium, oxalate and phosphate that are necessary for kidney stone formation. You may also want to limit the amount of sugar and salt you consume, as these can cause your body to excrete more calcium and oxalate in the urine. Consuming more fibre—by eating more fruit, vegetables and whole grains—may also limit your calcium output. Some studies have shown that a magnesium deficiency, relatively common among people living with HIV, can increase the risk of kidney stones. Conversely, the combination of magnesium and vitamin B6 can substantially reduce the formation of calcium oxalate stones, so taking a multivitamin that contains these nutrients may help. To check whether your oxalate output is normal or too high, your doctor can run a urine test for oxalate.

Uric acid stones most commonly occur in people with gout, and they affect more men than women. They can also occur as a result of some types of chemotherapy. Consuming foods that boost the body’s production of uric acid increases the risk for these stones. Such foods include liver and other organ meats, shellfish, some fish (especially sardines, mackerel, anchovies and herring) and beer. In addition, fructose (contained in high-fructose corn syrup, sugar and many foods and drinks) rapidly raises uric acid levels. If you tend to develop uric acid stones, cutting way back on these foods can decrease your risk. A blood test to measure your level of uric acid can help you know if you are at risk.

Struvite stones generally occur in women who have a urinary tract infection. These stones can become so large that they block the kidney, ureter or bladder.

The most common symptoms of kidney stones include:

If you develop these symptoms, notify your doctor or go to your local hospital as soon as possible. If treatment is delayed, damage to the kidney or other serious complications can occur.

Your doctor may run one or more tests to help determine whether or not you have a kidney stone and, if so, which type. These tests include:

In some cases, imaging studies are done—for example, a CT scan, MRI, X-ray, intravenous pyelogram, retrograde pyelogram or ultrasound—​to see the location and extent of stones.

The biggest risk factor for kidney stones is not drinking enough fluids. Kidney stones are more likely to occur if you produce less than one litre (slightly over a quart) of urine a day. If you suffer from kidney stones, consume at least eight or more glasses of “good” fluids each day, such as water, herbal tea, vegetable juice or broth, unless you have other medical conditions that prevent you from doing so.

Drink even more water in very hot weather, when dancing or exercising, or if you have diarrhea or have been vomiting. Remember that alcohol and caffeine can be dehydrating. Beverages containing either of these can increase your need for water and other good fluids. In some cases, medications may be prescribed to help prevent the formation of stones.

If you develop kidney stones despite your best efforts, the treatment will depend on the type of stones you have. In many cases, with enough fluid intake, the stone will eventually pass on its own. Your doctor may prescribe medications to help break down and remove the material that is causing the stone. If a stone is too large to pass on its own, or if it is growing, blocking urine flow or causing an infection or kidney damage, and/or if pain is too severe to be controlled, other techniques may be used. If the stone is small enough (less than half an inch, or roughly 13 millimetres) and located near the kidney or ureter, a therapy that uses sound or shock waves to break up the stone so it can leave the body in the urine may be used. For larger stones, procedures may be used in which a tube is inserted to remove the stone. When none of these methods are possible, surgery may be needed, though this is rare.