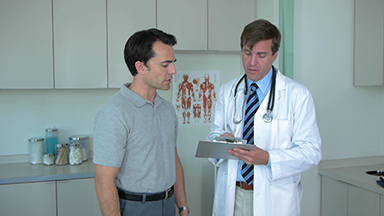 About six years ago, researchers in Canada and France published the results of a clinical trial of pre-exposure prophylaxis (PrEP) for HIV. This trial was called Ipergay and enrolled gay and bisexual men, some of whom received tenofovir DF and others who received placebo.

A sub-study of Ipergay focused on HPV and related issues in 162 men who had not been vaccinated against HPV. Over the course of two years, researchers found that there was a good chance that genotypes of HPV that are associated with cancer would be found in the men, particularly in the anus.

At the start of the sub-study, participants completed questionnaires and gave blood and samples for HPV testing. To obtain HPV samples, swabs of the anus and penis were used. For the mouth and throat, a solution was gargled and collected. Most participants were in their 30s.

Results of assessments for abnormal cells in the anus were graded as follows:

Cells that have been graded LSIL and HSIL are the most concerning in the short term, as they can further transform and become highly abnormal and pre-cancerous.

At the start of the study, HPV was found in 93% of men in one of the anatomical sites previously mentioned.

Overall, HPV was more often detected from the anus than the other sites.

Over the course of the study, researchers found the following changes:

The risk of becoming infected with a new high-risk genotype was similar whether participants received tenofovir DF or placebo.

Assessments for abnormal cells in the anus found the following test results at the start of the study:

By the end of the study, the distribution of test results was as follows:

The researchers noted that in previous studies HIV-positive gay and bisexual men had high levels of HPV infection, in part because their immune systems were unable to contain HPV.

According to the researchers, assessment of the swabs from the penis also found high levels of HPV—“much higher than previously reported in [gay and bisexual men] without HIV.”

In contrast to the anus and penis, analysis of fluid from the mouth found “relatively low” levels of HPV. These low levels were similar to those reported in other studies with HIV-negative gay and bisexual men.

In Canada and other high-income countries, a vaccine called Gardasil 9 is approved. This vaccine greatly reduces the risk of infection with certain genotypes of HPV and problems caused by them:

The researchers found that some high-risk HPV genotypes (16, 18, 31 and 52) were increasingly common in the anuses of the men over the course of the study. They stated that this finding suggests that the men were susceptible to infection by these genotypes.

Taking all of their findings into account, the researchers suggested that vaccination against HPV with Gardasil 9 would be beneficial in gay and bisexual PrEP users. Although there are three approved HPV vaccines, Gardasil 9 provides the broadest coverage against the most HPV genotypes. The researchers also recommended “similar cancer screening and vaccination strategies” in men who have sex with men, regardless of whether they are HIV negative or positive.

Addressing HPV-related cancer risk among men who have sex with men (MSM): A guide for health care providers – Sex Information and Education Council of Canada (SIECCAN)