Worth a shot: Injectable PrEP for HIV prevention 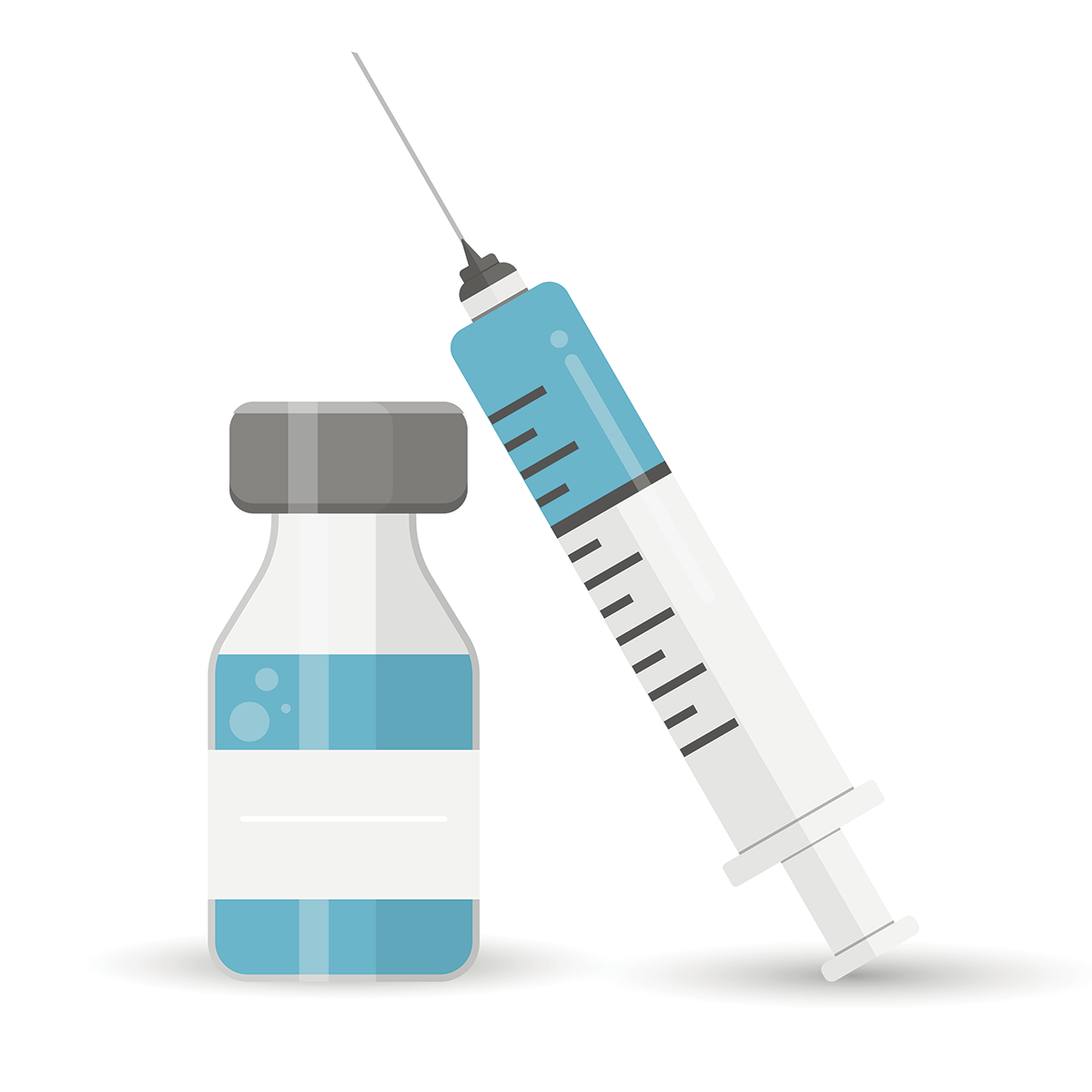 Currently, highly effective oral pre-exposure prophylaxis (PrEP) is available in Canada in the form of a pill. A new long-acting injectable form of PrEP was recently approved for use in the United States and may become licensed for use in Canada in the future. Injectable PrEP has been shown to be safe and effective at preventing HIV and could provide another option for PrEP for people at risk for HIV. Greater choice could help to increase uptake of PrEP and therefore prevent more HIV transmissions.

Long-acting injectable PrEP with the drug cabotegravir was licensed for the prevention of sexual HIV transmission in the United States in December 2021.1 The drug is licensed for HIV treatment in Canada and has potential for future licensing as PrEP. The World Health Organization recently released new guidelines on long-acting injectable PrEP and is advising countries to consider this as another effective HIV prevention option, (among others including oral PrEP, condoms and post-exposure prophylaxis) for people at risk of HIV.2

HPTN 084 is a large ongoing study among cisgender women in Sub-Saharan Africa.7 In this study, among 3,224 women, there were four infections in those assigned to take injectable PrEP (n = 1614), a rate of 0.2 infections per 100 person-years. In the oral PrEP group (n = 1610), there were 36 infections, a rate of 1.85 infections per 100 person-years. Those taking injectable PrEP had a significantly lower risk of infection than those taking oral PrEP. As with HPTN 083, the difference was largely due to low adherence among people who acquired HIV in the oral PrEP group.

These two clinical studies found that injectable PrEP was generally safe and that severe side effects were rare.3,7 The most common side effect was mild to moderate pain or tenderness at the injection site; the proportion of people who experienced this decreased with subsequent injections.

One concern with injectable PrEP is the development of drug resistance, which happened in a small number of participants who got HIV while on injectable PrEP in the two clinical trials. Drug resistance developed in these participants because their HIV infection was not detected right away, so they continued to use injectable PrEP despite having HIV. There were delays in detecting the infection through standard HIV testing because cabotegravir slows down viral replication and delays the body’s production of antibodies to HIV, which affects the test accuracy.8 Using more sensitive tests, such as viral load tests, rather than standard HIV tests, has been shown to help to detect HIV infections earlier for people on injectable PrEP.8

Drug resistance may also happen if a person stops taking injectable PrEP but gets HIV after discontinuation. This is because low levels of cabotegravir remain in the body for a long time (known as the tail period). The chance of developing drug resistance is increased if a person gets HIV during this time.9 To avoid this, the US guidelines recommend that people who stop taking injectable PrEP, but are at ongoing risk for HIV, should take daily oral PrEP for two months after stopping injections. Similarly, if a person misses a scheduled injection there is a risk they could get HIV and develop drug resistance. If a person needs to miss an injection (for example, if they will be away on vacation), they can be prescribed oral PrEP to take until they get their next injection.10

If injectable PrEP becomes licensed in Canada, it could help to increase the number of people taking PrEP by providing more options for people to choose from. Oral PrEP, which involves taking a pill, usually once a day, was licensed for use in Canada in 2016, but uptake remains low, except among gbMSM.11 More work is needed to increase uptake in populations other than gbMSM, and also among trans, Black and Indigenous gbMSM.10,12 Injectable PrEP would provide another option that may help address certain barriers to oral PrEP and allow people to choose the option that is right for them.13

A good example of how more choice can lead to higher uptake is from the research on contraception.14 The first form of hormonal contraception was an oral pill but over time a variety of longer-acting options became available, such as an injection, a patch, intrauterine devices (IUDs) and more. Research shows that as the number of options for contraception increased so did the overall uptake,15 as people had the ability to choose an option that would work for them.

A study among gbMSM in Toronto supports this idea.16 In the study, participants were asked about their willingness to take various forms of PrEP. As more potential options were included, the proportion of people who indicated interest in taking any form of PrEP increased.10,16

Researchers are studying various other possible types of PrEP that could eventually become available in Canada, including other injectable options, vaginal rings, implants under the skin and slow-release pills that need to be taken monthly.13 A greater array of PrEP options could help to further increase PrEP uptake among populations at risk for HIV in Canada.

With injectable PrEP and other potential types of PrEP on the horizon, studies have looked at interest in different PrEP modalities. Several populations disproportionately affected by HIV have expressed interest in injectable PrEP, including gbMSM16–19, transgender women,20,21 cisgender women (including Black women and female sex workers)22–24 and people who use drugs.24,25

While studies have shown that many populations are interested in injectable PrEP when told about it, research also shows that knowledge about PrEP generally is low among transgender women,20 cisgender women23,24 and people who use drugs.24,26 Education efforts related to both new and existing forms of PrEP need to target all populations at risk for HIV and consider their unique needs and concerns.

Studies have found some potential advantages of injectable PrEP compared with oral PrEP, which may help to address certain barriers to oral PrEP identified by populations at risk for HIV, such as adherence and stigma. A major advantage of injectable PrEP is that for some people daily pill taking is a barrier to PrEP and injectable PrEP overcomes some of these barriers.18,19 This was reported in studies of various populations, although different populations face different challenges associated with daily pill taking. For example, some people who use drugs report that remembering to take oral PrEP can be a challenge while they are using drugs or dealing with competing priorities.26 Concerns about safely storing PrEP medications for those who are homeless or on the street can also be a barrier to taking daily pills.26

For some people, the fact that injectable PrEP is more discreet than oral PrEP is seen as an advantage. For example, Black women and young gbMSM have reported a preference for injectable PrEP because it can help to avoid PrEP-related stigma.17,21 As another example, the discretion of injectable PrEP can be a benefit for people experiencing intimate partner violence who worry about a controlling partner finding their pills.27

What can service providers do to support the rollout of injectable PrEP in Canada?

There are two major hurdles that must be overcome before injectable PrEP can be successfully rolled out in Canada. First, the pharmaceutical company needs to apply to Health Canada for approval of long-acting cabotegravir for use as PrEP, and Health Canada must approve it. Second, access barriers such as cost will have to be addressed, if injectable PrEP is approved. Advocacy by the community is needed to support the submission of an application by the drug company. Also, service providers can work to advocate for universal free access in their province or territory.

We know that oral PrEP uptake has been low, despite evidence showing interest among diverse populations. Education and counselling activities should continue to include information on the HIV prevention benefits of oral PrEP and include support to address the barriers to access faced by people wanting to use oral PrEP. Education and counselling will also need to include information about injectable PrEP if it becomes approved by Health Canada. This will have to include supporting clients to decide whether PrEP is right for them and which form of PrEP is preferred. In the meantime, service providers should be prepared to address questions about injectable PrEP should they be asked by patients or clients.

Once approved, service providers can support access and ongoing care in a number of ways. Those designing injectable PrEP delivery programs should consider the unique needs of their community and work to make sure that access to injections and to testing is as convenient as possible (e.g., offered in locations where people are already accessing other services). Also, given the stigma around PrEP, sex and drug use, it is important that clinics providing PrEP offer non-judgmental care. Service providers could consider how they can make injectable PrEP accessible in places where people already feel comfortable accessing sexual health care, such as sexual health clinics and community health centres. Non-clinical service providers can consider partnering with, or referring clients to, a local clinic that offers PrEP.

PrEP: Where are we going? – webinar

The future of PrEP is now! – CATIE blog

Mallory Harrigan is CATIE's knowledge specialist, HIV testing. She has a master’s degree in community psychology from Wilfrid Laurier University.