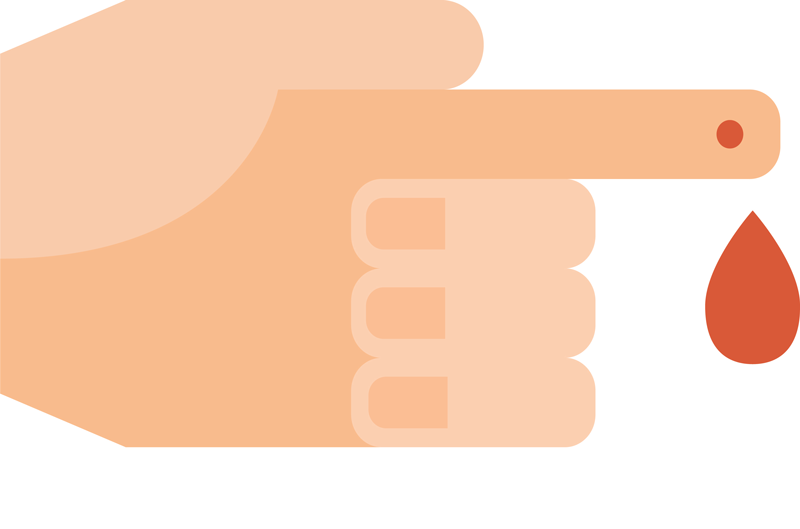 HIV self-testing (HIVST) refers to an individual taking their own sample for HIV testing and then performing the test and interpreting the results themselves.1 An HIV self-test can use either oral fluid collected with a swab or blood samples collected through a finger prick. An HIV self-test that uses a blood sample has been licensed for use in Canada. HIVST has been incorporated into program models in a variety of ways in different countries around the world. This article will review some program models that have expanded the use of HIVST into diverse settings to reach diverse target populations.

What is the current state of HIV self-testing?

The World Health Organization (WHO) recommends offering HIV self-tests in addition to more traditional HIV testing approaches (e.g., blood draws, point-of-care testing).1 According to the WHO, 77 countries have policies related to HIVST.2 These countries include the United States, where HIVST using an oral fluid sample was approved in 2012,3 and the United Kingdom, where HIVST (using either oral fluid samples or blood samples) became available in 2015.4 Other countries have also approved HIVST using oral fluid samples or blood samples.

In Canada, the INSTI® HIV Self Test has been licensed for use. It uses a blood sample collected through a finger prick. At the time of article publication, there are no HIVST policies in Canada.

What potential benefits and concerns should be considered when creating HIV self-testing programs?

HIVST has many potential benefits, including the following:

Even though HVST is now widely accepted internationally, it is important for organizations to be aware of the potential concerns regarding HIVST so that they can create programs that work to address them. Traditionally, concerns around HIVST are as follows:

What HIV self-testing program models have been implemented?

Existing HIVST programs use HIV self-testing kits provided by a testing manufacturer; the kits contain the equipment needed to take the required sample (e.g., finger lancet, swab); instructions on how to collect the sample, process the sample and interpret the results (e.g., written instructions); and information on how to link to confirmatory testing or healthcare if the test is reactive (e.g., a 24-hour telephone hotline). HIV self-test kits can be supplemented by additional materials developed by individual programs, such as instructions on how to perform and interpret a test (e.g., pictorial instructions, videos on the test process) and/or additional information on how clients can link to care following a reactive test (e.g., supplemental information on how to connect with health navigators, digital health platforms or additional pre- and post-test counselling services).

This article provides examples of different program models used for HIVST from jurisdictions where it is approved for use. Available research evidence on program models from countries that have an HIV epidemic similar to Canada’s comes largely from the United States, where an HIV self-test that uses oral fluid samples has been in use since 2012.

Programs have used community-based venues to target high-risk populations for HIV testing; for example, HIV self-test kits have been distributed in bathhouses or saunas by staff or through use of an onsite vending machine.10,11,12 These approaches target MSM populations and have brought the option of HIVST to venues that were already providing point-of-care HIV testing onsite (although this is not a requirement).10,11 Issues identified with this approach include concerns about clients getting a reactive result in isolation and concerns that clients who access HIVST in these venues may miss out on comprehensive screening for other sexually transmitted infections (STIs).11

The HIV self-test kits had instructions for use, which included graphical information on how to interpret the test results in addition to the manufacturer’s instructions. Kits also included manufacturer’s instructions on obtaining medical assistance if the test was reactive along with an additional flyer with information on a 24-hour linkage to care hotline provided by a local HIV/AIDS service organization. In the event of a reactive test, participants could use either of these methods to connect to medical assistance.

A study found that the program distributed a high number of HIV self-test kits to MSM with a high positivity rate, however, linkage to confirmatory testing and HIV treatment was below 50%. The observational study took place between January 2016 and July 2017, and documented that 1,398 HIV self-test kits were distributed through the vending machines. Participants were provided with survey information in the HIV self-test kits and the study did not specify a timeframe in which surveys needed to be completed. Therefore it was not possible to specify the timeframe in which confirmatory testing or linkage to care took place. In total, 110 people completed a survey (a survey was completed for 7.9% of the kits that were distributed). Results indicated the following:

Survey participants were invited to take part in a follow-up survey and 11% (12/110) participated. All 12 participants said the process of using the vending machines was “positive” or “very positive” and all would recommend the program to a friend.

Peer-based programs that use a social network strategy to increase conventional HIV testing (non-HIVST) (i.e., programs in which a client is motivated to test for HIV by a person in their social network) have been shown to be effective in engaging people at risk for HIV in HIV testing.13 Using a social network strategy, or peers, to assist in the distribution of HIV self-test kits could increase testing in populations that are at higher risk for HIV and potentially reach populations that would be missed by conventional testing.14 There are examples of peer HIVST programs in the USA15 and in parts of Europe16 and Africa.14

A program in Alameda County, California (a large urban/suburban county), recruited African American MSM, Latino MSM and transgender women as peer recruiters to distribute HIV self-test kits to their friends and networks. Peer recruiters self-identified as having recently had sex with a man and as being comfortable discussing HIV with others. Peer recruiters received a three-hour training session on HIV basics, how HIVST kits work, how to support people who test positive and link them to care, where to direct people for information on HIV confirmatory testing and treatment and how to collect data. Peer recruiters were paid $100 to participate in training. Each peer recruiter was provided with five to eight oral HIV self-test kits and asked to share them with friends who they believed had not tested for HIV in the last year. Peer recruiters received an additional $150 if they distributed at least five tests.15

A study found that the program reached more people who had not previously tested or had not tested in the past year than a point-of-care testing program in the same community. It also had a significantly higher positivity rate. The observational study took place between January 2016 and March 2017 and involved the completion of an online survey by 114 people who received an HIV self-test kit from a peer recruiter (total of 165 kits distributed). This information was compared with 2015 data from the Alameda County community-based HIV testing program, which focused on providing rapid point-of-care testing to particular populations (e.g., gay men and other MSM). It included venue-based and mobile testing, with testing provided by trained HIV test counsellors.15 The comparison found the following:

Mailing out free HIV self-test kits to individuals who request them online is seen as a distribution method that can increase HIV testing. This strategy allows people to complete tests in their own homes. It can provide confidentiality and privacy for people who may experience stigma related to HIV testing in more traditional settings. Although previous programs using mail-out HIV testing have required clients to mail their samples to a laboratory for processing, thereby addressing potential linkage to care issues by having follow-up completed by a medical professional, HIVST allows clients to interpret their results at home and therefore requires new approaches to link people to care.5 Mail-out HIVST programs have taken place in the USA7 and Australia,17 and a large program and study is currently underway in the United Kingdom.6,9

The Home Test Giveaway program in New York State mailed free at-home oral HIV self-test kits to MSM, transgender and gender non-conforming people who have sex with men. The program started in New York City and later expanded to other parts of the state.7,18

The Home Test Giveaway program used targeted online advertisements through social media (e.g., Grindr, Facebook, Scruff) to recruit people who then completed an online eligibility questionnaire. Eligible people provided their email address and were emailed a “discount code” that could be redeemed on a website for a free oral HIV self-test kit that was mailed directly to them from the test manufacturer. Participants received HIV self-test kits in non-descript packaging that included information on post-exposure prophylaxis (PEP), pre-exposure prophylaxis (PrEP), HIV testing window periods and symptoms of acute HIV.18

Results of a study found that a large number of kits were distributed and the majority of the people who received a test used it themselves. Reactive tests were found in fewer than 1% of participants, with high rates of confirmatory testing and linkage to care. The observational study took place between November 2015 and February 2018 and included results from five testing campaigns. Participants were emailed a follow-up survey two months after HIV self-tests were distributed and received a $25 gift card if they completed the survey. A total of 17,383 eligible participants received a discount code for an HIV self-test via email, and there were 12,182 discount code redemptions for the HIVST kit. Forty-six percent (7,935) of those eligible responded to the follow-up survey. Survey results indicated that18:

Of those without a previously known diagnosis, 25 (78%) reported receiving confirmatory testing, and 84% of these people self-reported a positive result. At the time of the follow-up survey, 95% of those with a confirmed positive diagnosis had had their first HIV care appointment and 85% of those who had had an appointment had started treatment. Finally, 96% (mean across all five campaigns included in the study) of survey respondents reported that the likelihood that they would recommend the program to a friend was high. The majority of the participants also said that they liked the privacy and convenience of at-home HIV self-test.

What do these programs tell us about the development of HIV self-testing programs in Canada?

An HIV self-test has been licensed for use in Canada and service providers should be prepared for the test to become widely available. Service providers need to determine ways to support clients who wish to use HIV self-tests and could consider developing or adapting program models to assist in the distribution of HIV self-test kits (e.g., by mail, from a community health program, using peers). Considerations can include the context in which the service providers work and how best to reach populations that could benefit from HIVST (i.e., those that may not be accessing testing otherwise, those that require frequent testing). Issues around access to tests and costs associated with tests must also be considered, as a lack of public funding for HIVST in jurisdictions has the potential to hamper the use of HIV self-tests.

The developers of HIVST programs should ensure that they address potential concerns related to HIVST. Here are some of the questions that should be considered:

*The WHO guidelines on self-testing and partner notification define the following groups as key populations: men who have sex with men, people who inject drugs, people in prisons and other closed settings, sex workers and transgender people.

Reaching the first 90: how HIV self-testing can help us end the HIV epidemic (CATIE Blog)

I Know My HIV Status (CATIE)

Amanda Giacomazzo is CATIE’s knowledge specialist, treatment and prevention programming. She holds a Master’s degree in health science with specialised training in health services and policy research, and has previously worked in knowledge translation and public health at the provincial level.