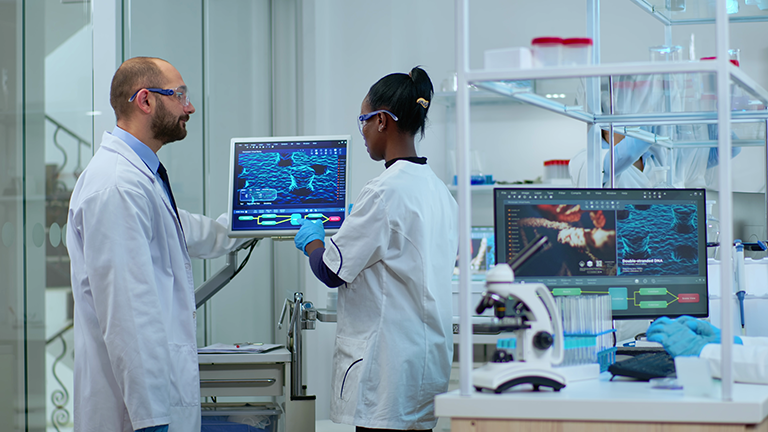 When used as directed, HIV pre-exposure prophylaxis (PrEP) is very effective at reducing the risk of HIV infection. As part of the routine care of PrEP patients, visits to the clinic every three months are usually required. At these visits, assessments are done, including blood, urine and swabs for sexually transmitted infections (STIs). As well, prescriptions are renewed and discussions with a nurse or physician take place.

Over the past two decades, rates of one STI in particular—syphilis—have been increasing in Canada and other high-income countries. Syphilis is a multistage condition (with primary, secondary and tertiary stages) that can damage nerves, which results in loss of hearing and vision, as well as major organs such as the brain, heart, liver and kidneys. Syphilis can injure the fetus during pregnancy and cause complications in infants born to infected mothers. This STI can be detected with regular screening and can be treated with antibiotics.

Researchers in Melbourne, Australia, reviewed the medical records of men who have sex with men (MSM) who attended a local sexual health centre for PrEP. The centre had a PrEP clinic where patients were seen by appointment only. The centre also had an STI clinic where no appointment was necessary. Over a period of three years, the researchers compared syphilis diagnoses made among men who visited the PrEP clinic every three months for their scheduled appointments and men who were taking PrEP who visited the STI clinic in between their scheduled PrEP clinic appointments.

According to the researchers, “a substantial portion of primary (58%) and secondary (44%) syphilis diagnoses were made at interim STI clinic attendances, between PrEP appointments.” They added that “syphilis screening at routine three-monthly PrEP visits alone fails to detect a portion of primary and secondary syphilis infections and may be insufficient in preventing onward transmission.”

As previously mentioned, PrEP users made appointments for their three-monthly visits to the PrEP clinic. At those appointments they consulted a doctor and underwent routine STI screening. People with no symptoms of STIs did not undergo routine physical examination and generally self-collected specimens for STI screening.

The researchers noted that “PrEP users who developed STI symptoms could also attend the walk-in STI clinic outside their booked PrEP visits for additional STI testing and treatment.”

During the study, there were 69 cases of syphilis in 61 men—eight of the men developed syphilis a second time.

The stages of syphilis diagnosed were as follows:

The remaining cases of primary syphilis cases were diagnosed at the PrEP clinic during the routine three-monthly appointments. A majority of these men (60%) had symptoms.

Regardless of the clinic where syphilis was diagnosed (the PrEP clinic or walk-in STI clinic), the part of the body most commonly affected by primary syphilis was the penis (80%) and the remainder of the lesions affected the anus.

There were 29 men diagnosed with early latent syphilis. A majority (76%) of these cases were diagnosed at the PrEP clinic through routine lab tests. The remaining cases were diagnosed through lab tests at the walk-in STI clinic. According to the researchers, visits to the STI clinic were likely driven by “possibly symptoms or screening for other STIs”.

The present study had at least the following limitations:

Despite these limitations, the study underscores the importance of syphilis screening among PrEP users. Indeed, the researchers stated that their findings suggest that “three-monthly syphilis screening at routine PrEP visits alone is not adequate to detect significant numbers of primary and secondary syphilis cases among MSM taking PrEP before they are potentially infectious and transmissible.”

The researchers made several other important points:

To remedy the situation that they have uncovered, they recommended that “access to syphilis screening and testing between PrEP clinic appointments should be available so treatment of [newly diagnosed infections] can be administered without delay.”

“MSM who are commencing HIV PrEP should receive education and health promotion regarding the risk for syphilis and recognition of primary and secondary lesions; and the importance of disclosing potential symptoms at PrEP appointments to expedite treatment.”

MSM “should be advised of the need for regular syphilis testing, including at least three-monthly screening for [symptom-free] infection, and in addition, testing for any lesions or symptoms that develop between PrEP clinic appointments.”